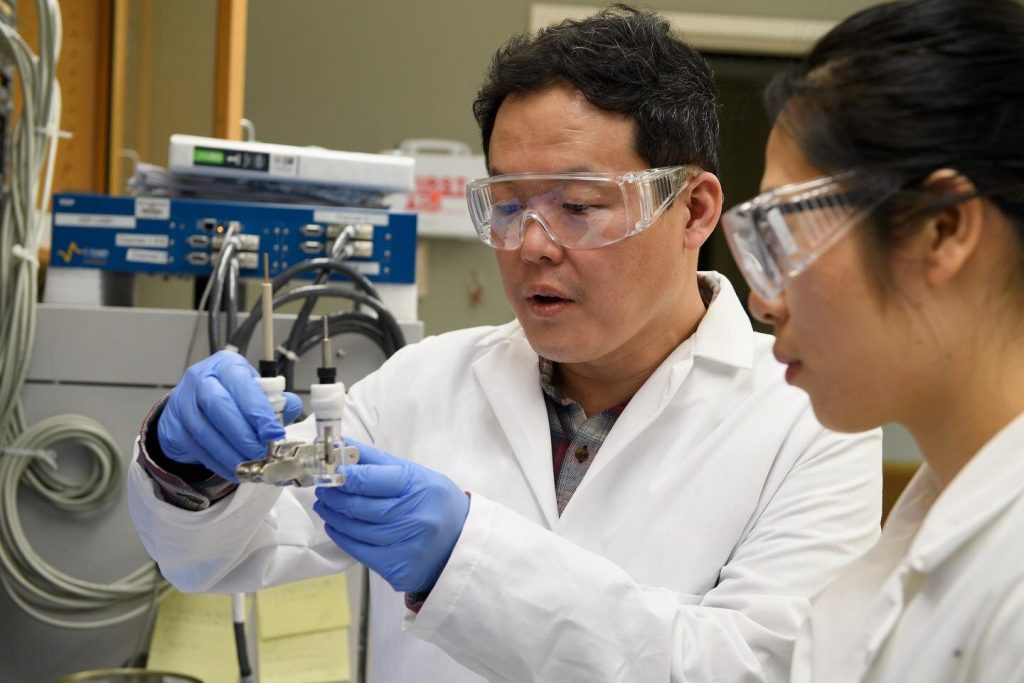 The researchers used a formulation for their batteries that led to the formation of a unique, protective layer around their lithium anode, protecting the batteries from degradation and allowing them to work longer under typical conditions. Led by Min-Kyu Song, assistant professor in the WSU School of Mechanical and Materials Engineering, the researchers report on the work in the journal, Nano Energy.

Lithium metal is considered the “dream material” for batteries, Song said. That’s because among known solid materials, it has the highest energy density, meaning that batteries could run twice as long and hold more energy than the ubiquitous lithium-ion batteries that power most modern-day electronics. While lithium-ion batteries work by passing lithium ions between a graphite anode and a lithium cobalt oxide cathode, the anode in a lithium-metal battery is made of the high-energy lithium metal.

“If we can directly use lithium metal, we can improve the energy density of batteries dramatically,” Song said.

While the advantages of lithium metal have been known for decades, researchers have never been able to make them work safely. As electrons travel between the anode and cathode through the external circuit to power a device, Christmas-tree like dendrites begin to form on the lithium metal. The dendrites grow until they cause electric shorts, fires, or explosions. Even if they don’t catch on fire, the lithium metal batteries also very rapidly lose their ability to charge.

The WSU research team developed a battery in which they packed selenium disulfide, a non-toxic chemical used in dandruff shampoo, into a porous carbon structure for their cathode. They added two additives to the liquid electrolytes that are typically explored in next-generation lithium batteries.

The two additives worked synergistically and formed a protective layer on the lithium metal surface that was dense, conductive, and robust enough to suppress the growth of dendrites while allowing good cycling stability, Song said. When tested at typical current densities people would use for electronics, the protected lithium metal anode was able to re-charge 500 times and retained high efficiency.

“Such a unique protective layer led to little morphological changes of the lithium anode over cycling and effectively mitigated the growth of lithium dendrites and unwanted side reactions,” he said.

The researchers believe their technology can be scalable and cost-effective.

“If commercialized, this novel formulation has real potential,” Song said. “Compared to solid-state batteries which are still years away, you don’t have to change the manufacturing procedures, and this would be applicable to real industry much sooner, opening up a promising route toward the development of high-energy lithium metal batteries with a long cycle life.”

The researchers are continuing to work on the battery, developing a separator that will further protect the battery materials from deterioration and enhance safety without compromising performance.