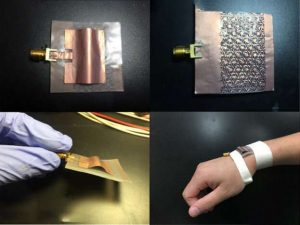 Penn State engineers are using computational power and data sciences to work on stretchable, flexible — and wearable — devices that could lead to innovations in the health and wellness fields. Credit: Applied Materials and Interfaces

Bulky, buzzing and beeping hospital rooms demonstrate that monitoring a patient’s health status is an invasive and uncomfortable process, at best, and a dangerous process, at worst. Penn State researchers want to change that and make biosensors that could make health monitoring less bulky, more accurate—and much safer.

The key would be making sensors that are so stretchable and flexible that they can easily integrate with the human body’s complex, changing contours, said Larry Cheng, the Dorothy Quiggle Professor in Engineering and an affiliate of the Institute for Computational and Data Sciences. His lab is making progress on designing sensors that can do just that.

If biosensors that are both energy efficient and stretchable can be achieved at scale, the researchers suggest that engineers can pursue—and, in some cases, are already pursuing—a range of options for sensors that can be worn on the body, or even placed inside the body. The payoff would be smarter, more effective and more personalized medical treatment and improved health decision-making—without a lot of bulky, buzzing and beeping pieces of monitoring equipment.

Some of the ideas that researchers at Penn State and around the world are investigating include stretchable textiles that can incorporate biosensors. Paper-based sensors could also potentially be used to create smart bandages that can monitor the status of wounds. Temporary tattoos could even incorporate biosensors for health monitoring. For example, a biosensor-enabled tattoo could provide diabetes patients with instant estimates of their glucose levels.

The researchers recently released their analysis of the latest developments in flexible and stretchable biosensors.

An antenna that can transmit data is the key element for these biosensor ideas, said Cheng, who is also a member of the Materials Research Institute at Penn State. But it can’t be an ordinary antenna. An antenna in the human body would require it to not just be durable, withstanding the extreme conditions of the body, but it also needs to be stretchable, so it can fit the contours of various organs and tissues in the body.

Creating those stretchable antennas require complex computations to model all of the different variations the design of the sensors can take in order to determine the best designs. And that means the design process alone requires lots of computational power, he added.

The team also wants to see how mechanical and electromagnetic properties are changed as the device changes shape.

“We need to leverage the computational resources to design this efficient antenna that can be stretchable, but, more importantly, with this stretchable antenna, we can do a lot of things because if we want to get the place where these sensors are transmitting data, this antenna is the key element that you can’t get around,” he said. 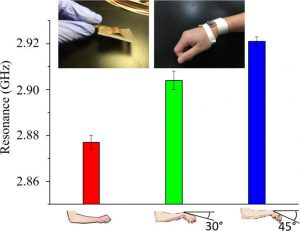 Because there are so many variations in design and different parameters, engineers need a lot of computational power to select the best design for new wearable technologies. Credit: Penn State

The next step is finding ways to power the sensors. Current batteries may be too big and rigid to power a sensor that can operate on or in a human body, said Cheng. His lab is now investigating new ways to power biosensors.

While we might think that we have to plug the sensor into an energy source, Cheng said that we are actually surrounded by natural and human-made sources of energy, called ambient energy.

“Our work now is also focused on harvesting the ambient energy, which can include Wi-Fi—the 3-G, 4-G or 5-G, or even microwave sources,” said Cheng. “With ambient energy, it’s always on, no matter whether you’re using it or not, it’s there. Even when you go to sleep, it’s there. If we don’t harvest that energy, it just gets wasted.”

The researchers’ design calls for a stretchable rectifying antenna, or rectenna, that can convert electromagnetic energy into direct current. Cheng said that might be able to power the device, or charge up a battery as a power source.

Because the device has access to a broader range of available energy, the initial results show that the researchers’ design is about 10 to 100 times better than existing models.

“If we only harvested the energy at a single frequency, it will, of course, minimize the amount of energy we can use, but by harvesting the energy over a wide band around the device, it will compound the efficiency,” said Cheng.

In the future, Cheng said his team will continue to work on biosensors, but they are also investigating the potential integration of biosensors with organoids, which are human-cultured, organ-specific tissues designed to mimic the function of natural organs. Cheng said that organoids could be used for medical testing.

“Animal testing is used quite often in medical research, but testing in organoids would give us a much more ethical option,” he said.

Cheng added that designing materials that can assume three-dimensional shapes is yet another area of future research exploration for the group. These “pop-up” designs could be inserted to a target area as a flat surface, but then morph into a 3-D shape. These could be used in future applications in the health and medical fields, among others.