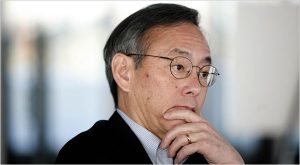 “I hope everyone thinks about what is happening in the world around them.”

Steven Chu was awarded the Nobel Prize in Physics for his work on lasers but today spends much of his time working on new solutions to tackle climate change. Ahead of the 2018 Nobel Week Dialogue on the topic ‘Water matters’ we spoke to Steven about his love of science and how our changing climate is shaping the water on our earth.

What do you most enjoy about science?

“What I enjoy about it is you’re trying to figure out how the world works. I love the idea of cumulative knowledge – by experiment, observation and quantitative analysis you get closer to what you think is going on. And that accumulates over time. It’s not just one person or one set of time but over many hundreds of years.”

Who has inspired you?

“There are numerous people that I met when I was in college, in graduate school and beyond. People whose general interest in science really drives them well beyond job security or even getting Nobel Prizes.

For example, Charles Townes the inventor of the laser died at 99, almost 100. And up until the last year or two of his life he was working. I remember calling him up when he was about 95 or 96. I wanted to talk to him about something – it was a Saturday afternoon – and I called home and his wife answered. I said, ‘Oh Frances is Charles there?’ And she said, ‘Steve! It’s Saturday! He’s at work, he’s never home Saturday.’ And I was also at work – I still work on Saturdays.

This is part of why science is so wonderful – the people who do it really love doing it.”

Is it important to do work that has an impact on society?

“As a citizen I hope that all people, whether they are scientists or not would think about what is happening in the world around them.

Scientists have a special place in the sense that they have perhaps a higher ability to understand many of the issues that society faces where science gives guidance. Science doesn’t say you have to do this and you have to do that. But science does tell you – if for example the ozone layer is being threatened by certain chemicals in the atmosphere – what’s the cause of it, what’s happening and then society has to respond to it. The same is true of health and clean water, clean air and finally of climate change.”

Why is water such an important issue right now?

“Water is necessary for life. We among the planets on our solar system have a very special place. Seventy percent of the earth’s surface is water but that water is salt water. What really sustains life is fresh water.

Fresh water is produced by the heat of the sun, evaporation, rain or snow – and our fresh water resources are being much more strained in part because of the rising population. In addition to the rising population, is rising wealth so more and more people can afford and demand more meat in their diet. That means you have to grow more food but also more food for livestock that then use that food to generate meat for people to eat. This all puts a strain on the water supplies.”

How is climate change shaping water on earth?

“Over the last couple of decades there’s much more evidence that the climate is changing and a large factor is due to humans. It’s something where as time goes by we’re finding that the earth has a very hair-trigger response to slight changes.

Already with a one degree rise we see weather in the last couple of decades has dramatically turned. But that’s just the tip of what we’re going to be seeing. Most of the impacts will be later in this century and in the next several hundred years.

For example glaciers, particularly in Antarctica, are beginning to slide. The ice is beginning to roll down, sort of like a slow-motion avalanche when once it’s going you can’t stop it until you’ve reestablished a friction grounding line. Even if you decrease the temperature it will require decades in order for it to slow down and stop. This is something we did not expect.

We also know as a matter of history, not climate models, that in a world one degree warmer than today the average sea level was six to nine metres higher than today. We used to think that it would take several thousand years [to reach that], now we think it’s going to be a few hundred years.

A six to nine metre rise in sea level would mean that central London is underwater. Ten percent of the world’s population lives within ten metres of sea level. Because that’s now expected to happen much faster that means you’re going to get displaced people from sea water rises.”

What can we do to tackle this problem?

“There’s an increasing number of scientists and engineers who recognise this is such a problem that they’re beginning to shift careers, as I have done. I have tried to encourage other scientists – if you have any knowledge or talent and think you can do something – to invent better batteries for electric vehicles, better energy storage, better distribution systems.”

Has receiving the Nobel Prize helped you in this work?

“One could say it gives you more voice, but in the end what gives you the voice is not a prize you might have but what you’re saying. That’s the beautiful thing about science.”