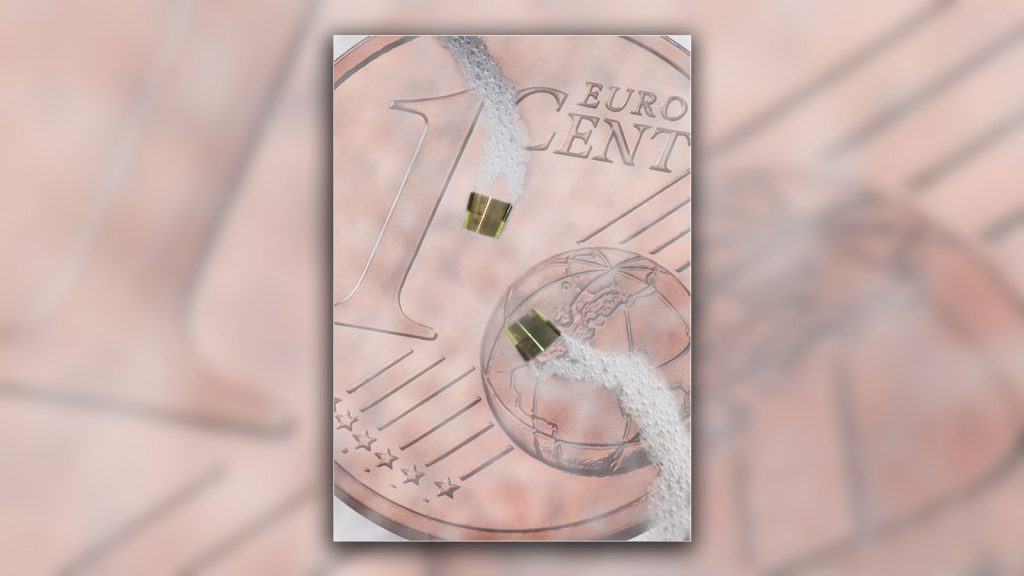 The smallest self-propelled electronic microrobots developed by the researchers maneuver in liquid on top of a 1 cent euro coin. Credit: TU Chemnitz.

An International research team led by Dr. Oliver Schmidt, working at Chemnitz University of Technology (TU Chemnitz) and Leibniz IFW Dresden has recently developed a microrobitic system with a wide range of possible applications, ranging from completing micro-surgeries to delivering goods to humans. This robot, presented in a paper published in Nature Electronics, builds on an idea introduced by the same team of researchers almost a decade ago.

“We first started exploring the idea of creating a tiny microrobotic system that is self-propelled by a powerful jet engine and has microelectronic components on board almost ten years ago,” Schmidt told TechXplore. “Our initial idea was to build a smart self-propelling microsystem that can interact with single biological cells, which are of similar size to microsystem itself. This system should be able to move around, sense its environment, transport cargo, deliver drugs and carry out micro-surgeries.”

Since Schmidt and his colleagues first introduced their concept for a microrobotic system, their team and several others worldwide have tried to create similar technologies, primarily in vitro (i.e., using petri dishes). Implementing such as system inside the human body, however, has proved to be far more challenging. In fact, in order to complete tasks inside the body, the system would need to be controlled from outside and the information it collects (e.g. diagnostic data) should be easily conveyed to the outer world (e.g. to doctors or healthcare professionals).

“For a microrobotic system to work in the human body, it should contain electric energy, sensors, actuators, antennas and microelectronic circuitry,” Schmidt explained. “The main objective of our recent work was to make one large step towards this final (and admittedly very ambitious) final goal; still in a simplified way, of course.”

Schmidt and his colleagues fabricated their flexible microsystem by integrating micro and nano electronic components on a chip surface, in a similar way to how silicon technology is used to build computer chips. A key difference between their system and regular computer chips, however, is that the former’s design includes jet engines created using an approach pioneered approximately twenty years ago, which is not typically used in the development of mainstream microelectronics.

“The trick consists in putting highly strained thin materials onto the chip, which snap back (roll-up) into Swiss roll microtube structures, when they are delaminated from the chip surface,” Schmidt said. “This procedure can be controlled well, so that the rolled-up microtubes are firmly connected at two opposite sides to the microrobotic system. If these microtubes are coated with platinum inside, oxygen bubbles are generated by a catalytic reaction, once the platinum gets in touch with aqueous solution containing a little bit of hydrogen peroxide (H2O2).” 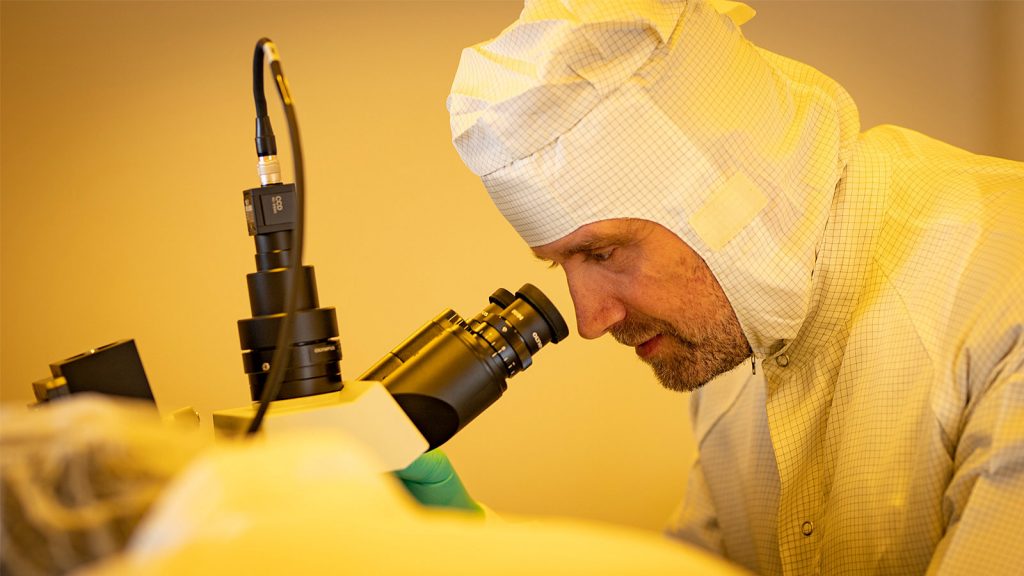 As a result of the non-conventional design strategy used by Schmidt and his colleagues, when the microrobotic system is placed into an aqueous solution containing hydrogen peroxide (H2O2) the solution enters its two microtubes, generating oxygen bubbles. These bubbles are then thrusted outside of the microtubes’ ends, accelerating the system by a mechanism known as jet propulsion.

“This jet propulsion principle was pioneered by our group 12 years ago,” Schmidt said. However, a twin-jet engine like in our present work was never constructed before.”

The catalytic reaction at the core the researchers’ jet propulsion strategy can be controlled by changing the temperature of the jet engines. A high temperature results in more bubbles and a stronger thrust; a low temperature in fewer bubbles and a weaker thrust.

Schmidt and his colleagues control the temperature of one of the two jet engines by applying a current that passes through a resistive element, which is connected to the engine. Changes in temperature increase the amount of bubbles generated and the subsequent thrust in one of the jet engines, which in turn allows the system to make right or left turns.

“You may ask yourself how we supplied the current that heats the resistive element,” Schmidt said. “For this purpose, we integrated a tiny antenna into the microsystem which can be fed by wireless energy from the outside (similar to wireless inductive charging of your mobile phone). So electrical energy is on board and can be used, which is entirely new for such a tiny self-propelled microbot.”

The tiny robot developed by Schmidt and his colleagues also has a little arm, which allows it to grab and release small objects in its surroundings. When the system’s temperature changes, the little arm performs different actions, bending up to grab objects (e.g., micro-pills) or bending down to release them.