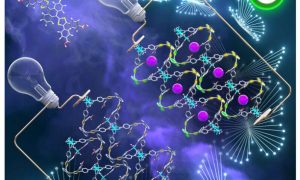 Metal-organic frameworks (MOFs) are emerging multi-functional materials that are gradually finding their way out of the research labs and into a myriad of real-world applications. For example, MOFs can store dangerous gasses, catalyze chemical reactions, deliver drugs in controlled fashion, and may even be used in rechargeable batteries and solar cells.

A team of researchers from Clemson University’s College of Science recently demonstrated that a novel double-helical MOF architecture, in a partially oxidized form, can conduct electricity that potentially makes it a next-generation semiconductor.

The team’s findings are described in the paper titled “The Advent of Electrically Conducting Double-Helical Metal-Organic Frameworks Featuring Butterfly-Shaped Electron-Rich π-Extended Tetrathiafulvalene Ligands,” which was published on March 18, 2020, as the cover article in Applied Materials & Interfaces, a journal published by the American Chemical Society.

Since the first MOF was constructed over 20 years ago, researchers worldwide have created more than 20,000 different MOFs made with a variety of metals and organic ligands.

According to chemistry associate professor Sourav Saha, most existing MOFs are made of linear or planar ligands. However, Saha and his team introduced a butterfly-shaped, convex ligand into a MOF, which resulted in a novel double helical structure capable of conducting electricity once partially oxidized by guest iodine molecules.

“This butterfly-shaped extended tetrathiafulvalene (ExTTF) ligand has been known to the chemistry community for a while, but it hadn’t been incorporated into a MOF before,” Saha said. “By introducing it into a double helical MOF, we could create unique S-shaped charge transport pathways that run along the seams of the neighboring strands. When the ExTTF ligands on one side of each double helical strand is oxidized by iodine and those on the other remain neutral, they form intermolecular charge-transfer chains along the seams. Electrons can flow along this pathway in an intermolecular fashion, making the MOF more conductive.”

Chemistry graduate student Monica Gordillo in Dr. Saha’s research group synthesized the double helical MOF via a solvothermal method, by mixing a zinc salt and the ExTTF ligand in certain proportion. She then heated the mixture in an oven at about 65 degrees Celcius for 24 hours.

“We got these beautiful plate-like orange crystals,” Gordillo said. “To achieve this exciting material, we adjusted the conditions of this synthesis, changing the ratio of solvents, ratio of ligands to the metal (zinc) ions and the temperature.”

To create a charge transport pathway capable of conducting electricity, she diffused iodine vapor into the porous MOF, causing one strand to become electron deficient while the other remained electron rich.

Electrically conducting MOFs may have some advantages over conventional inorganic semiconductors made from silicon, gallium, or arsenide, which are ubiquitous in logic gates, memory chips, and other electronics applications. For example, conventional semiconductors are synthesized at temperatures between 500 and 1,000 degrees Celsius.

“On the other hand, MOFs can be made in a more energy efficient way than inorganic semiconductors,” Saha said. “They can be synthesized anywhere between room temperature and 150 degrees Celsius, while maintaining the highly ordered crystalline structure that conventional semiconductors have.”

Saha and his team plan to continue to develop new MOF architectures with different geometries, compositions, and functions that can have applications in future electronics and energy conversion and storage devices.