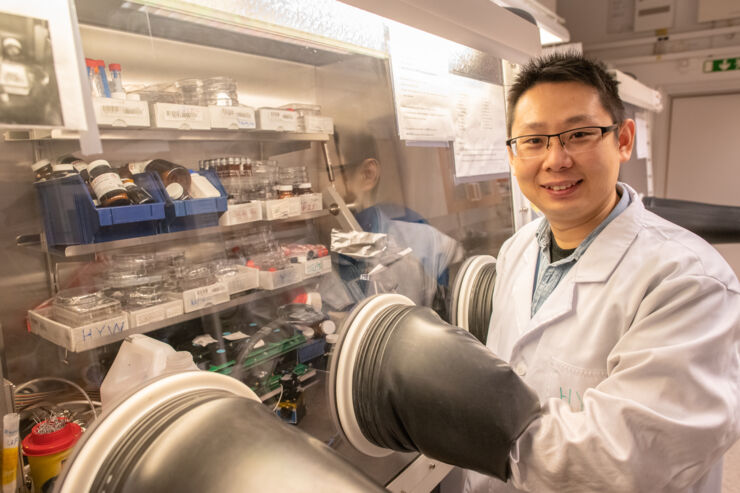 Researchers at Linkoping University, working with colleagues in Great Britain, China and the Czech Republic, have developed a perovskite light-emitting diode (LED) with both high efficiency and long operational stability. The result has been published in Nature Communications.

“Light-emitting diodes based on perovskites are still not sufficiently stable for practical use, but we have brought them one step closer”, says Professor Feng Gao, and head of research at the Division of Biomolecular and Organic Electronics, Linkoping University.

Perovskites are a large family of semiconducting materials that have aroused the interest of scientists around the world. Their special crystal structure means that they have excellent optical and electronic properties, while they are both easy and cheap to manufacture. Most progress has been made in research into the use of perovskites in solar cells, but they are also well-suited for the manufacture of LEDs.

The efficiency of the LEDs, which measures the fraction of charge carriers input to the material that are subsequently emitted as light, has increased considerably in recent years, and will soon reach that of competing technology. They are, however, not particularly stable, which means that so far they cannot be used in practice.

“Much remains to be done. Until now, most of the perovskite LEDs have either low efficiency or poor device stability”, says Xiao-Ke LiU, research fellow in the Division of Biomolecular and Organic Electronics. He and Feng Gao are the principal authors of the article.

Many research groups have worked on this dilemma, without particular success. Now, researchers at LiU, working with colleagues in Great Britain, China and the Czech Republic, have found a way forward. They have used a perovskite that consists of lead, iodine and an organic substance, formamidinium. They have then embedded the perovskite into an organic molecule matrix to form a composite thin film.

“This molecule with two amino groups at its ends helps the other substances to form a high quality crystal structure that is characteristic for perovskites, and makes the crystal stable”, says Heyong Wang, doctoral student in the Division of Biomolecular and Organic Electronics.

The new composite thin film has enabled the research group to develop LEDs with an efficiency of 17.3% with a long half-lifetime, approximately 100 hours.

Perovskites that contain lead and a halogen, in this case iodine, have the best light-emitting properties.

“We would very much like to get rid of the lead. So far we haven’t found a good way to do this, but we are working hard on it, says Feng Gao.

The next steps are to test new combinations of different perovskites and organic molecules and to understand in detail how the nucleation and crystallisation processes occur. Different perovskites give light at different wavelengths, which is a requirement for the long-term goal of obtaining white light LEDs.